Reasons To Say What’s On Your Mind 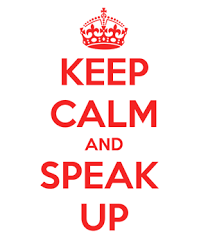 It’s not always easy to tell people how you feel. If you’re shy or prefer to avoid confrontation, you might let an opportunity to share your views or stand up for what you believe in pass you by. Although it can be intimidating at times, becoming more assertive in discussions can change your life. It will elevate your confidence, make you more resolute in your beliefs and cause people to take note when you open your mouth. Learning to speak your mind freely is all about changing your attitude—you have to have faith that what you’re saying is worth hearing.

1. You won’t feel disappointed in yourself

Ever walked away from an encounter wanting to take a hammer to your head as you’re so angry for not saying what you meant? The fact is that biting back what you really want to say can be tantamount to hitting the self destruct button. Racing against time to pick your friend up from the airport? Your fault for not saying you had too much on already that day. One of the worst things about failing to say what’s on your mind is that you’ve absolutely no one to blame but yourself

2. You won’t end up resenting other people

How many times have you clattered around the house seething with anger because you’re doing everything and nobody else if lifting a finger to help you? How often have you been short with friends who have unwittingly upset you or directed bad karma thoughts at colleagues who seem blissfully oblivious to the fact that you’re taking on more than your fair share of work? Were so unused to spelling out our needs that we expect those around us to guess them instead, and get outraged when they don’t. By speaking up, you’re giving those closest to you a chance of meeting your needs rather than becoming victims of your unexpressed resentment.

5 steps to start speaking your mind